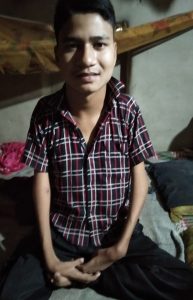 Yes, I am saying about the Liton Roy. He is reading in the HSC at the Ramdubi Hat High School & College. Liton is suffering from Cerebral Palsy (CP ) by birth. His fathers name is Lolit Chandra Roy and mothers name are Nomita Rani Roy. Liton’s have only one sister. His father Mr. Lolit Chandra is a day laborer and mother is a housewife and living with extreme poverty. They haven’t any land except homestead 1-2 DM. Without selling labor, they didn’t manage their daily food and other cost.

Being a local organization JSKS is working since long time and during the implementation of Promoting Rights and Access to Inclusive Education Project (2009 to 2011), JSKS’s Project Officer identified to Liton that a Children with Disabilities are in Hargaon village under Sundarban Union who is not coming to School due to his disability. However, after necessary assessment, JSKS advocate to school and admitted him to nearest Government Primary School and developed the school infrastructure as disable friendly school. By this time JSKS provided necessary training to teachers and education related officials also.

Yes, the project has been finished but JSKS was always with Liton and now he is reading at college level. Due to his disability of CP, Liton always using low trolly and his friends help him to pull the trolly during schooling. Even they haven’t financial capacity to purchase the Low trolly and always JSKS provided him the low trolly.

However, JSKS is implementing the Youth Opportunity for Unity, Tolerance & Harmony (YOUTH) Project and Liton is the direct beneficiary of the project. During the lock down period Liton’s family was suffered from food crisis. When JSKS started the Cash support programme, Liton was selected as beneficiary and he got support 2 times already. Liton including his parents is so happy for the support and it is helping to continue his educational cost. Due to physical growth, Liton’s need a Low Trolly but the trolly’s price is very high and it is not possible to manage the amount from these small amounts. JSKS is trying to manage the fund for low trolly.

We wish Liton’s success in future.

Reshma Khatun a Person with Disabilities and she is suffering in Cerebral Palsy (CP). She is 20 years old and living in Purbo Saintara Village of Saintara Union under Chirirbandar Upazila. She was born with the CP. She couldn’t walk or standing. After her birth, father and mother left her and went to Dhaka. They were divorced and father married to other and mother is staining at Dhaka. Reshma’s grandmother (Nani) was taken responsibility to ensure food & other support. But her grandfather’s (67 years old) main sources of income are cycle mechanic and also living with extreme poverty.

Once JSKS was implemented Promoting Rights and Access to Inclusive Education for Children with Disabilities Project and the present PC of JSKS YOUTH Project Morzina Rupa was the Project Officer of the Project. However, Ms. Rupa identified to Reshma that she was in her village but Reshma and her grandmother does not think about the Reshma’s education. Rupa admitted her in the nearest primary school namely Purbo Saintara Primary School and she started her education. JSKS ensured follow up to Reshma and provided necessary assistive device for schooling like Tri-Cycle. JSKS provided several times the devices. And now Reshma is reading in Okrabari College and she is the HSC exam. candidate. And it was possible due to Reshma and her Grandmother’s commitment. 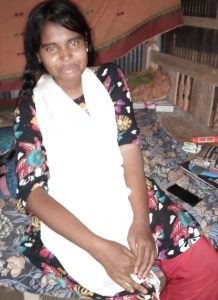 JSKS is implementing the Youth Opportunity for Unity, Tolerance & Harmony (YOUTH) Project, funded by Manusher Jonno Foundation (MJF) & FCDO (former DFID) and Reshma involved with the project since its inception. She is attending Life skill Sessions regularly. Due to COVID-19 and lockdown, people are not moving to other places. So that Reshma’s grandfather is also suffering from food crisis. The Union Parishad helps them but it was too small amount. When Reshma known the decision that she will get Tk. 2500, she and her grandmother were so excited and happy to know that JSKS is always with them. Obviously, it will help to continue her education.

Reshma want to complete her education and want to be a teacher. We wish her success in future. She also thanks to JSKS and MJF to support her and expect that she will get more support from the organization in future.

Ayesha gets born in Care Bazar village under Dimla Union of Dimla Upazila. Her father was a day laborer and she grows up from a needy family consisting 08 members. She completed her study up to class- II and discontinued her studies as her father was unable to afford the educational expenses. As a result, at the age of 14 years her father arranged marriage with Md. Gomiruddin in the neighboring village Nitchpara. Her husband was also a day laborer, the income from this profession was not sufficient to ensure three times food for the family members naturally starvation was a common phenomenon. In 2004 Ayesha’s husband become sick from sort of heart diseases, due to poverty Ayesha could not have been managed treatment of her husband and he finally died after few months of sufferings leaving behind 04 children and as assets of 33 decimals of homestead lands, a house with two rooms of CI sheet roofs, that attached fences and five mother ducks with 12 baby-chicks. Widow Ayesha for the sake of survival searched any work that can be supportive to earn a minimum but failed to manage even as a housemaid. Ayesha planned and starts cultivation of traditional vegetable varieties those are feasible to be grown on the small piece of land and on the house roofs with minimum and/or no cost, alongside seeking help from her close relatives and sometime from the neighbors. However, father-in-law of Ayesha was very much supportive for her family and continued support till his death sometime in the year of 2012 which is another tragedy in the life of Ayesha. Somehow she recovers the shock and searching on any other means of earning source. 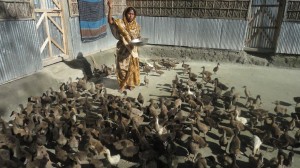 In 2011 SHOUHARDO II Program started its activities in the localities where Ayesha lives in. Ayesha enrolled as the beneficiary in poor category as has 33 decimals of homestead lands. Being enrolled as a beneficiary Ayesha regularly participated in the court yard meetings and foster the agenda if there is any that can be a factor to improve the present miserable livelihoods.

Few days after Ayesha get the opportunity to have basic training on “Poultry and Goat rearing” conducted by JSKS-SHOUHARDO II Program and a goat had provided to her from the program. Ayesha started caring the goat with profound enthusiasm and cherishing the will to implement the learning on poultry rearing in the near future. Rearing about a year her goat gives birth of two kids. She got Tk. 5,000 by selling-out the goat with two kids. Ayesha had the practical experiences on poultry rearing in particular the duck and her knowledge is enriched once again by having the training. Accordingly in consultation with the Field Facilitator she firmly decided to rearing duck on commercial basis because the locality she lives in is the low lying area and there has a big water body nearby which is another contributing factor in rearing ducks. She took the risk together with visioning that duck rearing might have been the turning point of a better livelihood. She purchased 150 ducks of 30 days old by Tk.4, 000 from selling of goat and purchased feeds by rest of an amount of Tk. 1,000, plus Tk. 1,000 borrowing from her relatives. From the 3rd months of rearing some of the ducks starts produce eggs and day by day the production was being increase. Ayesha began selling out the eggs at the rate of Tk. 30.00 per 04 eggs. A minimum portion of the earning from egg selling expensed for meeting up the household nutrition need while the major portion are reinvested for the expansion of ducks farm. In the 2nd half of 2012 she sale 500 young ducks @ Tk. 160 per piece and earned Tk. 80,000. At present a total nos. of 150 layer ducks and 300 baby ducks are in the farm of Ayesha. Every day Ayesha is getting 80 eggs on an average and the sale is around Tk.800 while the expense is Tk. 300 per day for feeds and marketing purposes. Aiming to risk free farming JSKS staff facilitate to introduce Ayesha with the DLS for necessary services.

From duck farming Ayesha renovates/repair her old houses by Tk. 40,000 leased in 20 decimals of land by Tk. 45,000 and expensed Tk. 12,000 for elder daughter’s marriage ceremony. Another two daughters are school going and Ayesha visioning to educate them up to Bachelor Degree. Her only son is helping Ayesha in the field of cultivation and duck farming. Seeing the success of Ayesha about 90 families of Nitchpara village involved in duck farming out of them around 50 are from PEP families of SHOUHARDO II Program.

Ayesha cordially recognized and says “There were no alternatives other than begging if I would not have been enrolled as a beneficiary in SHOUHARDO II Program” JSKS.