Youth is the most viable and potential human resource not only in population structure but also in social structure. Without proper and integrated social development of the youth, a nation cannot achieve her human goals intended. Although the Government of Bangladesh has formulated policy, plans and programs for youth welfare and implementing these programs but face a lot of socio-cultural problems in which they cannot develop and empower themselves properly. As a result, they cannot play their significant roles in socio-economic development and change. 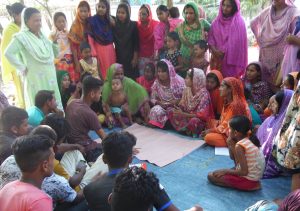 Dinajpur district under Rangpur division is most poverty prone backward area in Bangladesh, 47.2% population lives under poverty. Both poverty and extreme poverty (30.5%) are much higher than the national average and it is increasing. Agriculture is the main occupation and major part of the population work as day laborer. High dropout rate, early marriage & VAW is another phenomena. Youths are the main victim of poverty, unemployment rate (10%) of youth is higher than the overall national unemployment rate 4.18%. Unemployment rate (12%) of young women also higher than men. Lack of employment skills, working environment & workplace security are the obstacles for decent employment of women & youth. Youth are unable to integrate with mainstream work force due to lack of employment skills specially from Madrasha. In the other hand, lack of social integration of different groups of youth increases isolation, lack of respect to other’s opinion, believe & culture, intolerance and self-centered thinking of peoples. Violence extremism is a problem and increased in the region in recent years. JSKS study revealed that long lasting deprivation, exclusion, intolerance and threatening of identity/believe are the main driving factors of violence extremism. 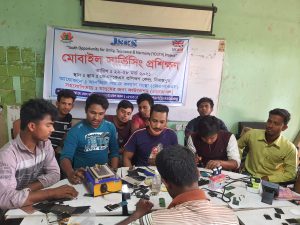 Direct beneficiaries: Rural youth age 15-30 years (30% women) including secondary school/college students, Madrasa students and youth out of schools (dropped out) with special priority on marginalized groups. Even ethnic minority, youth with disable will get special priority.